Package in the Mail 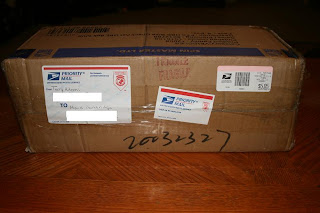 Today about 8:00 A.M  received a text message from Terry Adams. He was asking me if I received a package in the mail. I wasn't expecting one. Mostly all we get in the mail are bills. We were getting ready for the work day and my wife was headed out so she said she would check the mail box.
I was thinking to my self as I was walking back to the house. I don't think I have ever received a package from Terry Adams before. I wonder what is inside? 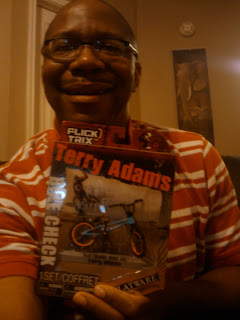 I just about flipped when I open up the package. It was his new Flick Trix Bike﻿. I had heard they have made it to Texas so I started looking just yesterday at Wal-Marts and Target. I didn't find one. But this one is very special. It was sent by Terry and even has his autograph. 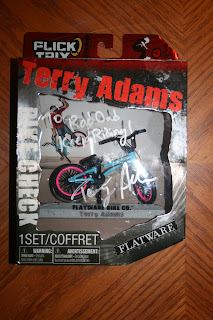 Thanks you so much Terry. I will put this on display in my home. You totally took me by surprise.
For those who may not know who Terry Adams is just watch this Video
Terry Adams House Check - "Cribs" from Ride BMX Magazine on Vimeo.
Professional flatland BMX rider Terry Adams takes you on a tour of his home in Hammond, Louisiana.


Filmed and edited by Fat Tony.