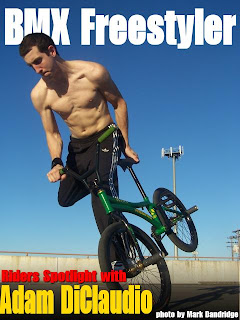 
Where do you live?
Austin, Texas USA

What do you do for a living?
I’m a Production Manager at Fed-ex Kinkos
Where are you Originally from?
Hermitage Pennsylvania (Western Pennsylvania, Ohio State Border)


I have personally known Adam for a few years now. It’s about time the rest of the world gets to know a little bit more about him too. How did you find out about the Austin Flat Scene?

Two years ago while living in Daytona Beach Florida, my friend Chris Porterfield, a bad ass skateboarder, wanted to move to Austin and I was floating on the idea of a permanent place to live as I was only in Daytona temporarily for work. Austin was known to be a good place for BMX, 9th Street, Empire, and the weather for winter riding. I was curious to see if there were any flatlanders so I did a search on the Internet, “Flatland BMX in Austin Texas,” found the website BMXFREESTYLER.COM and found out there was a crew. Watched the videos and was hooked. I moved to Austin almost three years ago. I loved the dedication to riding in the flatlanders here and have been a proud Austin Texas Flatlander ever since.

I still clearly remember when you made your Pro Debut at the Texhoma Relief Benefit. What was a highlighted moment for you during that day? 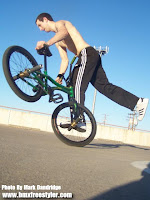 Pulling my links in my contest runs was probably the biggest highlight. It was a smaller contest and I thought it would be fun to ride with the pros. The winner of the beginner comp, Mando Stevens, moved up to Expert to compete so I thought, why not?

You were room mates with David Weathersby for awhile; I heard stories about you making room to ride in your living room. Tell me how that came about.

When we first got to Austin, the Apt I was renting had painted cement floors, so you know… we had to ride it! We cleared everything out, made the living room crunched in the dining area, and got busy. From there on the Chaos began. People would come over to ride and sometimes there would be four people taking turns. One from the kitchen, one from the hall, one from the doorway, and one from the dining area. The room was small, slick, and fast. It was a blast. 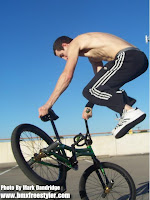 When I first met you, you had both front and back brakes. Now you’re riding brakeless. What tricks are harder now with out your brakes?

What riding environment do you prefer? In front of an audience, a competition for money, or a flatland Jam?

Riding with friends who are pushing each other to ride harder and progress, whether its happening at a contest, jam, show, or at the local ride spot. Everybody’s individual progression should always be more important than any riding environment. If your riding to your physical, mental, and spiritual limits, your environment will disappear. 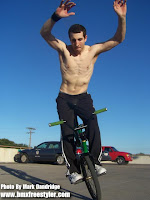 I have seen you do many combinations over the years. Some old trick and some very new combo's. What is your favorite combination of tricks?

I like back wheel spinning tricks, G-Turn pumping tricks, and lately spinning hitchhiker juggling at random points in my runs. My combos change all the time. I like to think of a combo and land it in as small amount of tries as possible. It makes the runs new and challenging.

Has there ever been a maneuver that has haunted you that you have not been able to ride in or out of that you really want to do?

More Tricks than I can possibly write. Those brakeless switches I wrote earlier. Currently, Pedaling death trucks/time machines, cross footed hikers, I’ve been beating the hell out of myself on whip lashes, and darkside pivoting/pumping switches on the back wheel, but there all coming, one at a time each trick, feels more comfortable.

I have heard many stories about how flatlanders like to have there bikes set up, i.e. Top Tube length, Zero Offset etc. How is your bike set up? 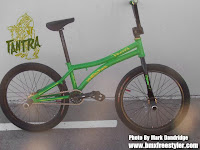 Flatland has gone through many transitions over the years. It is very much alive in the USA that is clear. But where do you see it going in the next 5 - 10 years?

I could only guess that it will grow with exposure in time. I don’t know how much, but I hope enough that more flatlanders could live comfortably doing what they love. I think a lot more young people are looking for an outlet and are finding flatland as a perfect release. We all need to recognize this and push anyone who is interested into the sport by leading with positive example in ever occasion. Flatland can be an easy sport to cut yourself off from interested soon to be riders, so instead, teach these future builders of the sport because these people will be the future of flatland.

What was it that got you interested in flatland to begin with?
Steve Luckett, the man who showed me the way and instilled an idea in my brain that has taken to where I am now. He was riding flat in my home town, showed me flatland when I showed interest, helped me build my first real flat bike, taught me about riders, tricks, and how to direct my learning. He was a great teacher and inspiration.

Do you remember the first flatland bike that you rode and where you got it from?

I had a Schwinn XS dirt jumping bike that I put pegs on, traded it for a Haro Master, then Steve sold me a real flat bike, my first Homeless Player. I loved that bike. I rode it to school one day and it got stolen, but I went around to everyone I ever bought a part from, had them fill out a hand made receipt, and turned it into my insurance company and bought a Dyno Detour, which was pretty much a slammer. I bought many bikes over the years after that. 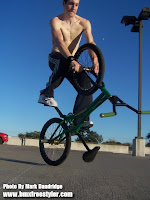 My brother rode some street, some park, but mostly a trail rider. He’s got mad skills. My brother was actually the first person who influenced me to ride. He would go out riding with his friends and I was lucky to be able to tag along. We both built trails. Dirt jumped, and rode some street. That was back in like 94-95. In about 97, I started messing with Flat. My brother dabbled in Flat here and there, learning the basics,mega spins and fire hydrants. BMX has been in my life for over 13 years.

The Austin Flatland Crew is growing in size every year. What is drawing so many riders out to Austin, Texas?

Probably the dedication to the scene, riding, and weather. I love it when new people and returning friends show up. It happens a lot now, and it is just amazing.

Pick out two moment's in your time of riding flat. What was the worst and the best moments for you?

The worst first. I got a hernia from getting stabbed in my crotch from a bike seat. There was a lump in my nuts that I thought was cancer. I went to the doctor and the lump was my intestine that dropped through the muscle lining in my pelvis. I had to get an operation. They went in my lower abdomen and pulled my intestine back into my stomach and put a mesh screen in the hole in the muscle tissue that went away over time after the muscle healed. Then there were the back problems I had last year, but that was the long time problem that eventually went away with proper care. The best time would be a combination of all the times going home after a session with the feeling of accomplishment after having a truly great riding session.I wouldn’t trade that for anything. 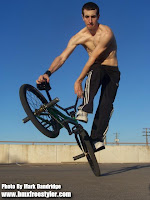 Who are the riders that you admire and their riding style; past and present?

Oh There are so many, but to name a few, top 6 in each, and this is very hard to do…Older is 1. Chase Gouin 2. Kevin Jones 3. Chad Degroot 4. Paul Osika 5. Andrew Faris 6. Trevor Meyer. Newer would be 1. Vicki Gomez 2. Justin Miller 3. Hiro M. 4. Terry Adams 5. Martti Kuoppa 6. Jesse Puente, some of those count as new and old school. There are so many I couldn’t name them all.

I want to give a quick shout to everyone in the old days who has ridden and influenced me. Now, the Austin Texas Flat Crew: Ruben Castillo, EZ Chris, Dave Weathersby, Chadwick, Jim McKay, Kenny Boucher, Diego Tejada, Rad Dad (Mark Dandridge), Julio Cutto, Anthony Crespo, Jason Childers, and Paul Covey. Also my family and friends outside of riding. BMXFREESTYLER.COM for this interview, and everyone who may cross paths with in the future. To every rider out there, Keep riding, and build yourself and the others around you. Thanks to all who read this, Love and Peace.

Do you want to talk to Adam DiClaudio? Send him a Email @ flatlandrider@msn.com


Riders Spotlight with Adam DiClaudio from BMX Freestyler on Vimeo.
This video was shot for Adam DiClaudio to support his riders spotlight interview.
Posted by Mark "Rad Dad" Dandridge at 4:33 PM