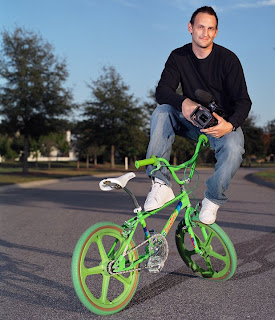 Here's some history on the Lung Spin:

First off, I never named the trick the "Lung Spin". I think it was named by the Flatland Fugitives because of my nickname "Lungmustard". I've always called it the Lawnmower Spin. In May of 89 I was working on a rolling lawnmower where I would roll it in a large circle (like an angled 1 handed X up peg wheelie) and then get out of it. It was kind of a dead-end trick at the time. In early 90, Kevin & I were revisiting the trick & kevin began figuring out a way to do it in a tighter circle and creating a "pump" to it. Keep in mind that Kevin understood the whole "pumping" concept from doing headspins and using his legs to slow down & speed up the spins. He applied that to the lawnmower spin & that trick had a new life. Kevin was busy with 20 other amazing creations at the time so he kinda left the trick alone, while I kept working on it & perfecting it. I always felt that the trick worked better with a longer bike, so I started doing the spins with the bars regular for a longer reach, and more pump.

How I do the trick is: I windup & swing my right leg like I'm about to do a megaspin, and there's a moment right at the beginning of the spin where the bars can turn & the bike can go into the Lawnmower position. This is also the point where you want to lay the bike out & start the spin wide, with your bike layed out as far as you can, and your balance leg out far too. once you're spinning with everything extended out, when you pull the bike closer & bring your leg in, the spin will go faster, so it's all about finding the sweet spot of maintaining the spin. This is a really fun trick to see how many spins (revolutions) you can do. I think the most spins I've ever done in one was 22.

See how many you can do! 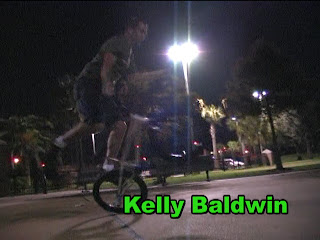 January- Hang 10 Seat Grab
February – Hang 5
March – Messiah
April- Karl
May- Switch Hand Steam Roller
June- Hitchhiker
July – McCircle
August – Cliffhanger
September – Brakeless Decade
October – Mega Spin
November-Lung Spin
December- Lard Yard
The Trick of the Month has become a staple of BMX Freestyler and Global-Flat. The Tradition shall continue on for the year of 2010. My goal over the years was to help riders out there stay motivated learning tricks and pushing the envelope that new variations would be thought of at the same time. All tricks in the Trick of the Month are a Beginner/Intermediate Level. That way all rider can participate or make attempts.
Here is how Trick of the Month works. Every month there will be a new trick in the spotlight. You can do 1 of 2 things.

1. Post a video or photo of you performing the designated trick for that month/

2. Make comments to help or inspire each other.

Variations are a good thing! So if you got something unusual and different please share with everyone. 09 was a great year for participation. I hope to keep the tradition going with some new tricks thrown into the mix along with some old faithful.

Trick of the Month Omari Cato Lung Spin from BMX Freestyler on Vimeo.

This is Trick of the Month for November 2010 with Omari Cato. Lung Spin with variations.
Posted by Mark "Rad Dad" Dandridge at 5:12 PM

Email ThisBlogThis!Share to TwitterShare to FacebookShare to Pinterest
Labels: Trick of the Month 2010