It is no secret that Matthias Dandois has been in Austin, Texas for the past month. There has been a ton of footage that has been posted since his arrival here. The camera was on him from the moment that he arrived to the moment that he left. 1 particular video caught many peoples attention. Around 15,000 people in 7 days. “Whip it”. It became an internationally success over 99 different countries. This made it the #1 video on BMX Freestyler to date. During the French Connection I had the opportunity to do a very quick informal interview with him. You can view that below.

Trick of the Month
Karl Kruizer

Mobile Link http://www.vimeo.com/10572841
Submit your photo or video by email to me at webmaster@bmxfreestyler.com


Coming Events
Rad Dad will be at Jomopro. Look for me and say hi. I will most likely be filming most of the event so please stop by and say hello. 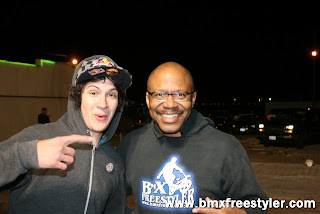 View Site JoMoPro 2010
Do you have an article that you want to appear in the Freestyler Friday edition? Send me a email at webmaster@bmxfreestyler.com
Posted by Mark "Rad Dad" Dandridge at 10:08 PM