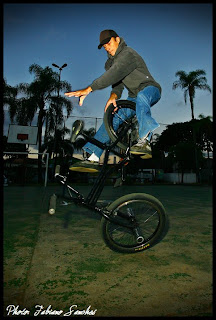 I received a email from Luis last week. Asking to post a new video of his on BMX Freestyler. I had been away for most of the week and not in my email. When I finally got a chance to watch it my mouth dropped. I could not believe what I was seeing. So I thought this was the prefect opportunity to do a interview with the man him self.
Thanks Luis for taking the time to do a interview. Lets get a few of the basics out of the way. What is your birth name age and year you have been riding?
My name is Luis dos Santos, have 29 years, I rider flatland 12 year started in 1998


Your cliffhanger jump into Hitchhiker is so insane! I started calling it Santos Suicide. When did you start work on this trick?
I started this trick in 2009


Did you ever bail really hard enough to bleed trying this trick?
I often get hurt in this trick, to me is one of the most difficult trick
Terry Adams does many tricks where he is jumping from one trick to another. What was your inspiration to learn how to do this?
To be honest it was Terry Adams who was my inspiration, he made ​​a lot of jump trick and popped into my head this trick cliffhanger jump into Hitchhiker our the best santos sucide rsrsr, I thought it would be impossible to do this trick, but nothing is impossible


I see your putting together a DVD. Who is going to appear in it?
The DVD CRAZY BMX goes to the 6th edition, this edition will appear championships street, a tour of flatland that I and my friends made in Rio de Janeiro, galleys flatland of Argentina, and I still have more footage to make for launches DVD CRAZY BMX Nº 6. I started editing and filming the 1st dvd crazy bmx in 2006 the best picture and editing I've ever done was dvd crazy bmx 5 that I'm in Atlanta Georgia and Athens where I participated the Twilight Jam 2009, was very good to visit a wonderful country
When will it be released and where can in be purchased?
It will soon be launching, I do not have the time and date marked for purchase blog crazy bmx: www.crazybmx.blogspot.com

Thanks to your time to answer a few questions. Do you have any shout outs or last comments?
Well, first I want to thank the interview bmxfreestyler and thank my family, my friends, my girlfriend and my support ciclo dias. Mensage: Continue riding BMX and realize their dreams, peace
www.Luisarroz.blogspot.com
If you missed it the first time here it is The Santos Suicide!

Email ThisBlogThis!Share to TwitterShare to FacebookShare to Pinterest
Labels: Interview