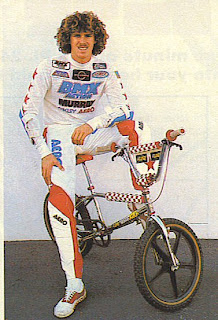 Miami hopper first appeared in the march 1985 issue of BMX Action.
R.L. Osborn, BMX Action march 1985: When I was doing some freestyle shows in Miami, Florida, this winter, saw one at the locals do the trick. His name was Paul Hopper, and he's a really nice guy. After I got this trick wired, I came up with a few variations of my own, and since Paul had no real name for it, I'm calling it The Miami Hopper after him

Reference
http://www.23mag.com/tricks/flat.htm
Posted by Mark "Rad Dad" Dandridge at 5:03 AM

Email ThisBlogThis!Share to TwitterShare to FacebookShare to Pinterest
Labels: Trivia