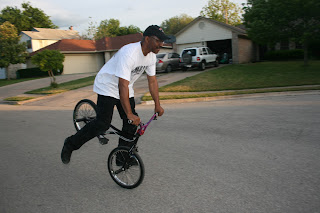 January- Hang 5
February – Turbine Peg Wheelie Sponsored By Team Mc Duff
March – Cliffhanger
April – Stick B
May- G-turn sponsored by Scott Powell
June- Dump Truck
July- Hitchhiker Juggler sponsored by Bobby Carter
August-Time Machine sponsored by Matt Wilhelm
September- Crackpacker
October-Lung Spin
November- Whiplash
December-Death Truck
Trick of the Month is back again for 2011. We may even have some surprises this year. I have some things in the works. We will have to see if they will work out through the year. We are going to start the year off with what has always been a very popular question to be asked on the message boards. The Hang 5! If you can already do a Hang 5 can you do it with one hand or your hands crossed? Can you use your opposite foot? Can you link out or in to it? Can you do it backwards and forwards? Can you Turbine your Hang 5? Can you pump your hang 5?
The Hang 5 is a great building block and gate way to many other tricks. Lets see some of those Hang 5’s and variations this month. 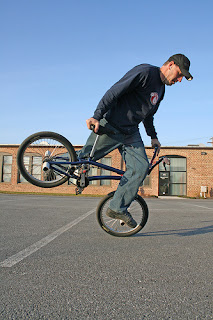 Photo by Erik Otto
Flickr Photo Stream
http://www.monolithicflatland.com/
Kevin Jones, Ride BMX UK august 2005: The Hang Five. As weird as it seems, at the time, at least for the first month or so, I just treated it as a way to get into the squeaker. I had a contest routine and I started off with a squeaker and then I did a whole routine or whatever. And then the next time I wanted to do the same combo and add some shit to it. I was messing around in my garage and I figured instead of hitting my brakes I could just pop up and coast a little bit to the end of my garage, do it forward for a while then go into a squeaker. First I went five feet and I was stoked, then ten feet, then I ran out of space, then I went out into the street, which is kind of a slant, and I went to the top of the road and I hauled down the road doing it. It was something that I learned in ten minutes; like ten minutes before I couldn't do it, then I was going a couple of hundred feet. And I was freaking out. It didn't open up any doors at the time, really, because there wasn't a hitchhiker, there wasn't a lot of front wheel rolling type combos. So I pretty much did it no-footed, did it one-handed, did little combos out of it. Then later, of course, it led to much more stuff. I remember showing people and I didn't even think it was a good trick at the time. I thought it was a corky way to get into something, almost like a peg wheelie. Then I went to a contest and did it and everybody thought they were seeing a brand new trick, like something totally different. I thought that was cool. Then everybody learned it.


This will show you how to do a Hang 5


Rad Dad-Trick of the Month 1-2011 from BMX Freestyler on Vimeo.
This is Rad Dad with the Trick of the Month. The Month of January 2011 it is a Hang 5. Submit your Hang 5 or Variations to webmaster@bmxfreestyler.com

turbine hang 5 from mare on Vimeo. 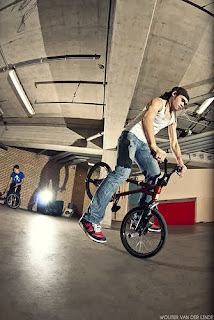 Email ThisBlogThis!Share to TwitterShare to FacebookShare to Pinterest
Labels: Trick of the Month 2011