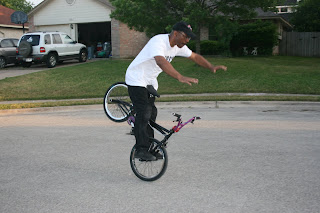 After watching my good friend Jim Mckay participate in round 1 of the Global-Flat Battles I became inspired to do so my self. The contest is run by Davis Dudelis aka Ondo. During round 1 there were 3 classes. Beginner, Expert and Master. There were a few of us out there that fall in between beginner and Expert Class. Between my self, Rad Dad and a few other we were able to find enough riders to create a new class. The intermediate class. This was the very first video that I submitted for Round 2 Preliminary round.
brian84corvette vs Mark (raddad67)

Amazingly enough I was able to advance to the next round the quarter finals. But for situations that was out of my control my good friend Clint was not able to put together a video due to a injury. So my quarter final run was uncontested.
clint23 vs Mark (raddad67)
The semi finals were next and I was going up the amazing Wouter van der Linde. We have known each other for some time and we have been feeding of each others riding. I had just learned Cliffhangers during the competition and Messiah it was time to put those to tricks together.
Wouter van der Linde VS Mark(raddad67)

Finally it was time for the finals and it was my good friend Brad. We have rode together on a few different occasions and we had competed against each other before. He was victorious during this final battle. I gave him a good run for the final stretch.
Bradlandr74 VS Mark(raddad67)

Global Flat Battles Round 3
It was time once again for global flat battles and still living from my high from round 2. I am feeling confident and ready to ride. My first battle was with Lurtz uruk. But there was something I noticed about this round. The riding level had increased significantly from round 2. This was going to be a much tougher battle. My riding level would have to improve in order to stay in the competition.
Lurtz uruk VS Mark(raddad67)

Next was the quarter finals. I was up against Kevin Brill. Kevin took this round with his silky smooth transition between tricks and a higher degree of difficulty. Even though I had made great strides with my personal progression. It was not enough to stay inside this competition.
Kevin at Kassel vs Mark(raddad67)

Round 4 Global Flat Battles
Here we are at the Round 4 of the global flat battles. I wasn't going to compete in this round. I was going to sit this one out and keep working on my personal progression. Round 3 made me realize that if I was going to win any competition I was going to have to keep pushing my self harder each round. Harder than I ever had before. The battles have always motivated me and pushed me to learn new tricks. In Round 4 I am going to keep pushing my personal progression at the same time do my best to put together combinations of tricks that can get me back into to finals of the intermediate class. We are still waiting for round 4 to begin but here is the video that has been submitted to be pitted against another competitor.
Round 5
Here we are at round number 5. I wasn't going to particpate during this round. I started to film but I kept going out of frame. But due to lack of participation Ondo contact me and asked if I could still submit a video. I did just that the same day he asked. I was battling Adrew. Adrew won 5-0 way to go Andrew


Orginally I was going to joing the Global Battles but the time I finally got to film I ran out of the frame so I could not submitt.  I got a message from Ondo saying there were some spots that needed to be filled. So I told him I would do my best to try and get something on film. These were not the trick that I wanted but they were the tricks I was able to pull. I am missing my editor right now so I used Movie Maker just so I could get it out today. WOW Good times for sure. Keep on Riding!

If you would like to participate or just follow this online competition. Just visit this link to global-flat. You can visit the forum as a guest but if you want to make a post you will need to sign up for a account. Look for the Round 4 to be starting up in the next few weeks.
Keep on Riding!
Rad Dad
Posted by Mark "Rad Dad" Dandridge at 7:52 AM