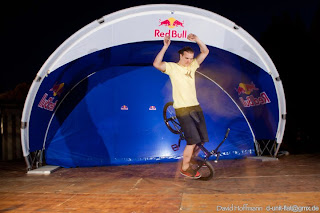 BMX Freestyler- We just completed our very first Hitchhiker Juggler Contest and we have the honor to chat with David Hoffmann. Can you tell everyone some basics. How old you are, where you live and years riding?
David Hoffmann- I'm 22 years old. I live in north of Germany in a town near of Hamburg called Lüneburg. I have been riding 9 year bmx flatland as of this Summer.

BMX Freestyler- You really whipped out those Jugglers. How many Jugglers previously had you done?
David Hoffmann- I don't know, but I did some long Hitchhikers before like this one in a carpark "hitchin´ a ride" . It also was my warm up trick during the winter - 10 juggler to combo.

BMX Freestyler-There was some controversy about Rule #1 and the use of a hill. Everyone seemed to use some sort of slope. Did you originally plan that spot or did you find it after you saw slope being used?
David Hoffmann- I tried it on different spots, but no spot was long enough to pull as much as I could. After I almost gave I up, I found the new build path close to the skate park, and the wind helped me a little bit.

BMX Freestyler-What do you plan to do with all the Money that you have won?
David Hoffmann- I don't plan with money. I put all my money on my bank, keep my life standard low, and when I see something that look like worth for it, I spend one night of thinking about it, and then buy it. This is my reverse of saving money for a new leptop, camera stuff or all the traveling I did in the last time (last year I went to Bacelona, Hungary, Portugal). but I bought ice cream for everyone on the skate park
.
BMX Freestyler-Where did you first here about the Contest? When did you decided that you were going to compete?
David Hoffmann- First i read about it on global-flat, and saw Art Thomson with 20. I thought about, that someone how's going to win will send his video on the last minute and the only way I am going to win is not counting my juggler until I put as much as I could.


BMX Freestyler-Who did your filming for you and how many tries did you make before you got to 48?
David Hoffmann- first, my girlfriend Anna, and second Max from nowherefilms 'course of rolling on a skateboard behind me. It took 15min. on the final spot and a day before one hour + some practice during normal sessions.

BMX Freestyler- Do you have any shout outs to anyone, last words?
David Hoffmann- Ride on everybody! and do not forsaken on a thing that is that much smaller than you - your bike.
Thanks again for your time and participating in the Hitchhiker Juggler Contest!

Email ThisBlogThis!Share to TwitterShare to FacebookShare to Pinterest
Labels: Interview