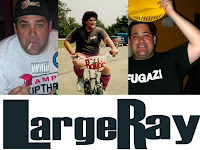 Ray, your name is as synonymous with the 80’s freestyle scene as Martin, Eddie,
Woody, RL, or Ron Wilkerson. How the heck did that happen?
If you were 300 pounds and could do some flatland or bust a 360, it would either draw some
attention or look really funny (or both).  It’s kind of like watching a fat guy try to run or climb
over a fence.  Just picture a 300 pound dude in painter’s pants and a flannel shirt doing an
AFA flatland run while everyone else was wearing uniforms that coordinated with their
bikes.  People were just wondering who I was and what I was doing there.

How did you come to be a part of the Plywood Hoods crew?
I’m more of an associate.  It was an honor, however, to do the Rockville show with them in ’
88.  I also appeared in the first couple Dorkin’ videos.

Did Mark Eaton and Kevin Jones ever try to help you become a top freestyler?
That’s some pretty serious talent you were around.
Before meeting Mark and Kevin, I’d seen what I thought were the best riders in the world.
When I saw Mark and Kevin ride though, I knew they were years ahead of anyone else in
the sport. As for helping me with my riding, Kevin said I’d never amount to much, but Mark
thought I could become a well rounded rider.

I remember seeing one of your runs at an AFA contest. It was hilarious to say the
least. Always entertaining. Describe one of your typical runs. What were some of
your more memorable contests?  Did anyone actually ever get annoyed at your
routines?
A typical run:  piece of sh*t bike, pants way too tight, 5 dialed tricks, Pollack with an air horn,
and Magoo firing up a dead crowd who’d been watching the same tricks all day.
My most memorable contests would have to be all the AFA 2 Hip King of Vert and Meet the
Street jawns. No, nobody every got annoyed…. maybe just a little smoke in their eyes.  In
fact, one judge at an AFA contest tried to help me go home with a trophy.  I’d placed 12th in
flatland, and if I could have convinced Dave Volker and Dino Deluca to cut me some slack in
ramps, I might’ve placed first overall.  I’ve got no hard feelings though.  Dave and Dino were
just trying to make a living, and I was trying to win a 4 cent trophy that I’d still treasure
today.  Maybe they could dust me off one of their old ones for Christmas.

Being that you were sort of the practical joker of freestyle, what are some of your
best memories from the 80’s? I’ve heard some good pranks you’ve pulled at
various AFA contests.  How crazy did things actually get?
Best memories:  hotel parking lot jam circles, hanging with all the superstars of the sport,
putting doodoo in the hotel microwave, and spending my formative years with Gary Pollack
without ending up in jail. I could go on forever.  Things got pretty crazy.  We were a bunch of
15 year old kids with no adult supervision.  We had no money, no cars, and no connections,
but we showed up at every event and were always the center of attention.

How would you compare the 80’s scene to the freestyle scene today?  What do you
miss most about the 80’s as far as freestyle goes?
I think things feel different to me mostly because I’m not in the scene anymore.  There are
still bikes.  There are still styles and magazines.  I just don’t know as many of the riders.  A
lot of things haven’t changed all that much.  Then again, a kid can’t show up at the X
games, do 3 tricks, put some smoke bombs on his bike, and get coverage.

What were some of the best contests that you’ve been to?
The first Charlie’s Bike Shop contests in Levittown, PA were where I realized that you didn’t
have to be from California to be good.  The 1987 AFA contest in Long Island, NY was cool,
because anyone you’d ever seen in a magazine or show was there.  Brooklyn Banks Meet
the Street in 1989 was as keepin’ it real as keepin’ it real can get.  More recently, I attended
the last two Roots Jams.  Being at those contests really got me excited about BMX again.

I think a lot of us saw the MTV show where you guys got the girl to attempt and pull
a back flip. Honestly, I’ve been riding for a long time, and I don’t think I could ever
work up the guts to try one.  Were you surprised that you were able to get her to
do it?  What was that whole experience like?
I actually tried to talk her out of the back flip, but Kevin Robinson saw her ride and knew she
could pull it off.  I was afraid she’d crack her skull open, and her dad’s a lawyer. Doing a
show on MTV definitely made me a celebrity for at least a year, but reality tv is a lot of
bullshit.  Kristin bustin’ a backflip was as real as it gets though, especially for such a fake
show.  Props to Kristin.

So, what freestyle goodies have you collected from the past? Word has it, it’s a
pretty extensive collection.
I have 23 complete BMX or freestyle bikes.  I won’t go into detail, because I’m sure you’ve
got limited space on your site.  Most people that see my bikes trip out on the variety and
quality of my collection.  Allan Cooke was so impressed with my inventory that he donated
his custom Specialized.  That’s the bike he used for the world record back flip.
I purchased Wizard Publications personal library from the first Bicycle Motorcross Action in
1977 to the last issue of Go in 1992.  I’ve got them all in the original binders.  Mike Daley
got them when the magazine folded.The saddest thing is that I threw out all my memorabilia
from back in the day.  I’ve gotten most of my collection from friends and on Ebay.

What have you been up to these days?  How is life treating you?
I’ve spent the last 3 years on the phone with Mark Eaton talking about his BMX documentary
Joe Kid on a Stingray.  I haven’t had much time for anything else. When I’m not wrapping
about BMX or surfing Ebay, I like to hang out with my fiancÈe Amy.  We’re getting married
next year.  She made me put all the bikes in the garage next to Dave Mirra’s Saleen
Mustang (or as Amy likes to call it “the latest senseless purchase”).  Don’t worry though, I’m
preparing for the Grand Opening of my BMX Please Touch Museum in 2007.  Ramp up the
Jawn.
Posted by Mark "Rad Dad" Dandridge at 9:22 AM