What else can be said about Eddie Fiola that hasn't already been said?
To me, growing up and riding a bike in the 1980's, Eddie Fiola WAS
freestyle. I'm sure many of you feel the same way. Eddie was always the
showman and a complete professional. 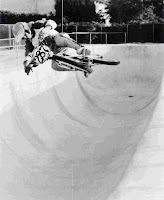 Jeff & Chris: What have you been up to since your freestyle days?

Eddie: When I got out of competition,  I did live shows for Vans.  It was cool, I got to
ride all the time.  For 5-6 years I did live shows:  on my own, with Gale Webb, and with
team mates Todd Anderson, Scott Freeman, and Josh White.  Vans restructured and
the promotional tours at that time took a back-seat.  I had to find a way to earn a living
doing what I enjoyed most:  riding.  I started hitting up LA again, going out for
commercial auditions.  Occasionally during my live show period I would get called for a
specific commercial shot.  When I started actively pursuing the TV work, the jobs began
coming in more frequently.  For about 5 years, I was putting in the time without pay to
learn the stunt industry.  I was taught the ropes (literally I learned to rig stunts), did a lot
of grunt work, and put in countless hours of hard work just to get my foot in the door.
One afternoon I got a phone call to audition for a new TV pilot - doubling police patrol
on mountain bikes.  My old school freestyle skills transitioned nicely to mountain bikes,
the focus of the show.  On Pacific Blue (USA Network) I doubled at one time or another
all of the main characters.  I was in the first 30 episodes ( 3 seasons).  It ended for me
there.  Not every show in Hollywood wants BMX freestyle, so I began to train in other
areas:  motocross, climbing and rappelling, scuba, fabrication, street bikes, and
precision driving.  Since then I have worked on a number of movies and TV shows
doing stuntwork, every little boy dream (and probably some little girls too).

Jeff & Chris: Do you still ride?

Eddie: Yes.  Occasionally I still do shows with Gale Webb, Todd Anderson, and
George Deuville.  Every now and then I go to the Vans Skateparks.  Some of the kids in
the neighborhood only know the new stuff they see on TV, so when I ride in front of the
house the kids think the old school tricks are something new.  I usually end up
spending a few hours teaching them the basics like fakeys or tail whips.

Jeff & Chris: What do you think was the reason for the decline in popularity of
freestyle in the late 80's early 90's?

Eddie: It's really hard to say.  As I look back now, what strikes me most is the shift away
from a sponsored team look into a more anarchist style.  Who bought the bikes?
Parents.  Who paid for magazine subscriptions? Parents.  That's simply my opinion.  I
could be wrong.  Also everything seems to run in cycles.

Jeff & Chris: What are your thoughts on the old school vs. new school scenes?

Eddie: When I look at old school tapes, I see the leathers, uniforms, sponsorships, and
team effort.  Back then it was really a big thing to be sponsored by GT, Vans, and
Skyway.  When you showed up to a contest there was never any question about who
you rode for.  Just like the Supercross guys now.  With old school we only damaged our
own bikes for the most part.  The new school tricks are very technical and difficult (and I
give "props" to the skills), I just don't like it when I see them doing the tricks on public
property.  The grinds kind of gave us a bad name with the amount of destruction that
they do, so I am really glad more parks are allowing for bikes.

Jeff & Chris: What are your thoughts on old school bikes vs the current ones?

Eddie: The old school bikes were light and made to be ridden smooth and fluent.
Where one trick flowed into another.  If you crashed, time to get a new bike.  The new
school bikes are made to be ridden off your roof, miss the landing, and get up, pick
your bike up (if you can because it weighs a ton) and try again.

Jeff & Chris: What do you miss about old school?

Jeff & Chris: What souvenirs have you kept from your old riding days?

Eddie: I still have my right hand drive CRX 1985.  The reigning "King of the
Skateparks" trophy.  A custom made frame from GT specifically for the skateparks.
Every magazine I have been in.  Multiple posters.  Freestylin' NORA Cups.  Select
leathers and jerseys - all GT.

Jeff & Chris: Since you were "King of the Skateparks" do you miss the original pipeline
in Upland?  Do you still ride skateparks?

Eddie: Let me think about that ---- Yeah!!!!  First we lost Pipeline, my favorite place to
ride, then we lost Mrs. Hoffman.  Every once and a while I ride the Vans parks in either
Orange or Ontario.

Jeff & Chris: Each of us here a vbmx has probably watched "RAD" 50 times!  How
many times have you watched it?  Any memorable stories while on set?

Eddie: I wore my original tape out from watching and showing other people, friends and
family.  Yeah, but my wife is typing my responses.  We filmed for about 2 weeks in
Canada.  In the qualifying race where "Crew" falls and gets hit by another rider  -  that
crash was real!!!  We cut the shot after I had recovered an hour or so later.  I got my
bell rung.  The shot was reset in the bushes and started filming again from that start
point.  In the park scene where the 2 main characters are riding for fun "What's all this
number 1 about?", the end scene with both jumping into the water ---
The water had a crust of ice on it and we did that early in the morning.   Man was it
cold!  There were chicks everywhere.

Jeff & Chris: Do you still keep in touch with anyone from the old school?

Eddie: Every blue moon I'll see Martin.  I still do shows with Todd Anderson.  And
recently spoke with Brian Blyther.  I occasionally talk to Steve McCloud.

Jeff & Chris: What was your favorite bike from back in the day?

Jeff & Chris: Are you amazed at what the old school stuff sells for on ebay?

Eddie: I haven't really checked it out -------  Holy S-T!!!!  I just looked I can't believe
people actually pay out that much money for old school stuff.  I gave half of that stuff
away 10 years ago before it was vintage.  It was just old and out of date back then.

Jeff & Chris: Word association time.  I'm going to say some names from the past and
you tell me the first thing that comes to your headâ€¦

Jeff & Chris: What are your future plans?

Eddie: Live long, ride my bike, and be happy.

Jeff & Chris: And last but not least  Whatever happened to the Porsche?

Eddie: Sold it.  Not because I needed the money, but because every time I drove it I
got a ticket.  As a matter of fact I got 2 tickets in one day.  I lost my license twice
because of it.  After a while it was better to just keep it parked.  I figure better to sell it to
someone else than to lose my license again.
Posted by Mark "Rad Dad" Dandridge at 9:04 AM