The King of Freestyle 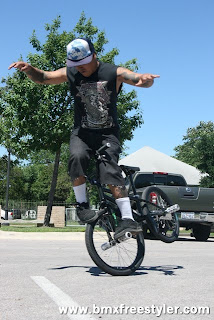 Ruben Castillo is Celebrating his 38th Birthday on May 6, 2010. The same day that "King of Freestyle" was released as well. This video was inspired by a phrase that Ruben used in the "120 PSI and Rolling" Interview. He said "This ain't segregation this is freestyle folks". That was a very bold,  true statement and it was being quoted on the internet. He is one of the very few people that I know that he can ride every aspect of BMX. In 1990 Ruben won  AFA Rider Of The Year in Texas.
Ruben  has had many DVD segments and achievements over the years. He is well  respected and known in the flatland community. It is trully a honor to be apart of his story as BMX Freestyler presents to you.
"The King of Freestyle"
Mobile Link http://www.vimeo.com/11509109