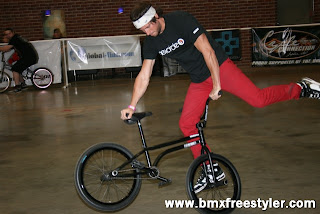 Interview with Fat Tony
BMX Freestyler- Fat Tony you have had a ton of progression with flatland since I have known you. How many hours are you getting to ride these days?

Fat Tony- Thanks man, I appreciate the compliment! Riding (flatland and street) always comes and goes for me in waves, and it's never on any kind of schedule. Between my busy travel schedule and all the other things I have going on at home, getting into a routine is virtually impossible. So as far as riding flatland for any number of hours? Haha, that doesn't happen... There will be a few weeks here and there where I may ride for an hour a day, four or five days out of the week, then there will be times when I won't touch my flatland bike for two months (or more). It's actually been a month to the day (as I'm typing this) since I rode in the Jomopro contest, and I haven't had a chance to ride a full flatland session since then—just a few dabbles here and there for a few minutes at a time. I'm on a plane as I'm typing this up, and I leave for another trip in four days and will be gone for another eight days. When I get back from that trip I'll be home for a few weeks, so I'll probably get back to riding a few hours a week after that. With that said, last weekend I moved into a new place in downtown Long Beach and it's just a few blocks from Chad Johnston's "Underground" spot, and less than a mile from my favorite spot by the Long Beach harbor. So I'm really stoked that from now on I'll be able to cruise from my condo to some sick riding spots without having to get in the car!

BMX Freestyler- When you had to do a run-off, what kinds of things were going through your mind? 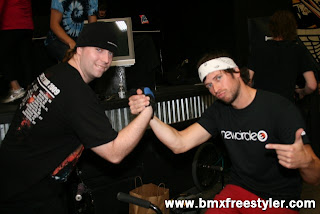 Fat Tony- Haha, the ride-off thing between me and Cody Ward at Jomopro was kind of funny. Pat Schoolen misunderstood what the judges told him or something and he told me that I tied for first place with Cody... Cody and I didn't find out we were actually tied for third until after the final results were announced two nights later. I was actually bummed I had to do the ride-off battle because I pulled pretty much a dream run for me—everything I wanted to do at Jomopro I did in my run on the first try. I didn't think I could ride any better than that, and I was super busy shooting photos and video at the contest, so I didn't want to have to ride again, haha. At that point I was kind of like, "Just give it to Cody... I can't do any better than what I just did." Pulling my newest and hardest link in the contest (that I had only pulled twice before—ever) made me unbelievably stoked. I'm sure the video shows it, too, haha.


BMX Freestyler- What kinds of things were in your goody bag?

Fat Tony- For the third place prize pack they gave me a Profile sprocket, some grips, a Flatware stem, some pegs, and an Odyssey shirt. The shirt was my size, so I kept it, but I didn't need the parts, so I gave them to my good friend from Toronto, Eric Favot. Jomopro had him so pumped on flatland that he wanted to build a bike. Eric got fourth in the expert class in park, and a week after he got home from the contest he built up a full-on flatland bike with the help of the parts I gave him. I'm so stoked to have another rider getting into flatland now!


BMX Freestyler- What kinds of tricks and combinations are your currently work on?

Fat Tony- Ummm...good question! Haha. This may sound weird, but I've never really been the type to set out and try to learn new tricks (on street or flat). I just do what I can do comfortably, then very slowly start building onto that stuff when it feels natural. But I'm still trying to get backwards hitchhikers more consistent. Those have been a struggle for a long time. I really want to pull one of those in a contest. And I really want to film one in a full combo without the bars scraping. It may (and probably will) take all year, but I'm working on filming a flaltand edit of myself for 2010. Last year I did a street riding edit (http://vimeo.com/8489482), and this year I want to do a flatland one. The filming helps push me to progress a bit more, and it's a lot of fun. So far I have two clips that I'm pretty stoked on.

Fat Tony- Yeah, thanks to the guys at Tip Plus, Colony, and Odyssey—I'm loving my bike setup! And thanks to everyone that is pushing flatland and BMX right now! Keep this momentum going!