With the recent release of “The King of Freestyle” by Ruben Castillo it sparked some comments on the Internet about his brother Robert Castillo. I saw there were some people wondering if he still rides and what he has been up to. I had the pleasure to meet Robert at Voodoo Jam 09. We have kept in contact since then. I thought to my self this would be a perfect time for an Interview with Robert Castillo a Living Legend.
Age: 42 Years Old.
BMX Freestyler- Robert, I have heard a few comments from people asking if you are indeed still riding. Are you still able to bust out some old tricks and are you still able to make progression?
Robert Castillo- I am indeed still riding. I’ve always kept a bike around to just mess with but now I'm actually riding in a few shows for the past 3 years. I haven't really learned anything new but I'm having fun relearning my old stuff, on a new school bike. Go figure. 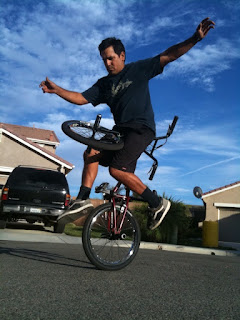 BMX Freestyler- I know that you work closely with Woody Itson. Do you ever throw down a flat session together out of the blue?
Robert Castillo- Woody and I do work closely on a daily. Every once in a while Woody will get his bike out and we'll session a bit on tricks that are older than most flatlanders today. Trust me Woody can still fire off some tricks!! 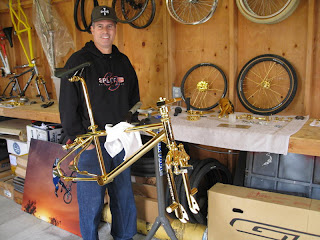 BMX Freestyler- What exactly is it that you do for a full time living now and what is your title?
Robert Castillo- I help Woody run Satellite Sports Group/BMX Pros Trick Team. Our company has a number of teams nationwide doing various events all year! This year alone we will do over 800 performances!! Schools, Fairs, Corporate Events, NBA 1/2 time shows, etc etc. My title at SSG is HMIC, "head Mexican in charge" lol. We just do whatever needs to be done and it seems to work. 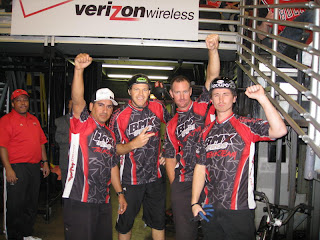 BMX Freestyler- What is your top 5 career highlights in flatland?

Robert Castillo-
1. Landing a sponsor with GT Bikes in "1986"
2. Traveling to JAPAN for almost 4 months and performing at Mitsui Greenland Theme Park.
3. Ruben and I both took 1st place at the AFA Masters National Round #1 in Palmetto,FL. in "1988".
4. I landed a gig in Las Vegas in 1991performing in the Hit Show "Alakazam" at the Aladdin Hotel and Casino for 2 years.
5. During Michael Jordan's Championship run with the Bulls, we got to perform a few 1/2 time shows for the Bulls fans.. 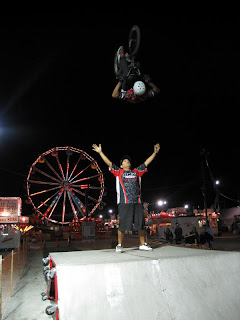 BMX Freestyler- You passed through Austin a few years back with a whole crew of riders. Sorry I missed you. What parts of the country do you hit up through the year?

Robert Castillo- We hit up about 30+ states a year! Its pretty random where we go but I would say that we visit Florida, Wisconsin, Georgia,  Arizona to name a few .. 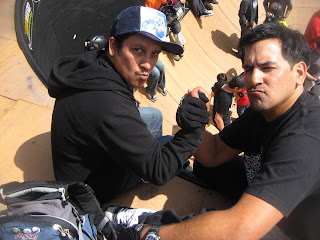 BMX Freestyler- Today’s flatland riding is so much different from what it was in the 80’s. How do you view today’s riding style?

Robert Castillo- I think today's riding style compared to the 80's riding style is that it flows a lot better and its just simply amazing!! It's where flatland should be. With all due respect I still think Flatland is underrated!! But I will say this, whenever people see it in person, it quickly gets there attention and instant respect!!

BMX Freestyler- A few days back Tim Knoll released a BOMB that rocked the BMX community as a whole. Where do you think the future of flatland is? How did you react to see Tim Knoll’s “Digi Cam edit”?

Robert Castillo- Tim Knolls video footage was original and pretty entertaining. It just opened up a new chapter in BMX! 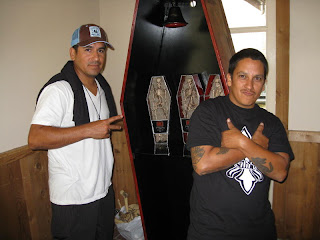 BMX Freestyler-You have been a part of the flatland scene for many years and you have seen and been to many competitions. What do you thinking of Battles and Flag rising versus points?
Robert Castillo- As far is that's concerned, I haven't been around flatland comps long enough lately to give a great opinion. From a spectators point of view, its exciting, and has an awesome build up! I say if riders like it, then run with it for now and time will tell what works and what doesn't. Voodoo Jam in 2009 was impressive and was put on by Terry Adams. He’s a guy who everyone likes and respects. As long as guys like him are pushing the sport and controlling where it goes and how it gets there, then all is good.... 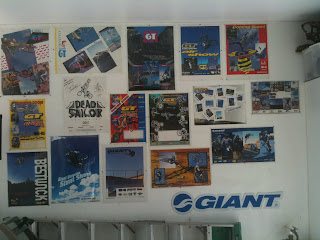 BMX Freestyler- What has kept you motivated all these years to keep riding and being involved with BMX when so many people will come and go?

Robert Castillo- Worried about getting a "real job" will keep a lot of people motivated! haha. Trust me it wasn't easy and its NO get rich quick program but I do live pretty comfortable now. There where plenty of times that I wanted to quit and go make some real money but I really had a passion for what I was doing whether I was riding, announcing, watching, trying to promote BMX, Myself or a Show. I just couldn't let go... No Regrets!!!

BMX Freestyler- Have you ever taken an extended brake from riding or being involved?

Robert Castillo- I did take a break from riding when I started to work for GT/Marketing Dept. and Woody Itson in 1995. I was Team Manager for the freestyle team and that took up all of my time. The Team that Woody had assembled at GT made me feel so old school and I felt like I needed to hang it up for good, until about 3 years ago. I just wanted to see if I could still ride again before I got too old. Also there are tricks I never got on video that would be nice to have for myself. 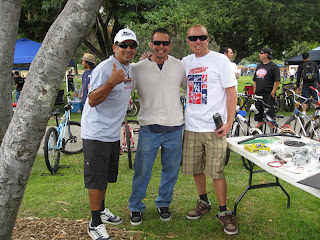 BMX Freestyler- Who’s in your TOP 5 favorite riders of all time and why are they there?

Robert Castillo-
Ramps: these are in no particular order
A. Mike Dominguez-He had some of the biggest aerials in the 80's and most of them where on an 8ft 1/4 pipe.
B. Mat Hoffman-He made up so many tricks that people really thought were impossible.
C. Eddie Fiola- He's the "KING".
D. Jamie Bestwick-OMFNG, WTF, SICK RIDING, Whatever....
E. Kevin "the Gute" Gutierrez-Always put 110% into his riding especially in shows. He doesn't care if he thinks he’s going down, he will try it anyways. He was one of the most underrated riders for a LONG TIME! But that doesn't matter to him as long as your entertained, IT"S ON!!!

-Flatland: these are in no particular order
A. Ruben "Rdog" Castillo-he’s my brother and he rules! Enough said.
B. Kevin Jones-ORIGINAL, and he can do every trick and style, it's because he invented them!
C. Martin Aparijo-He taught me so much during our GT Touring days and I also wanted to be like him.
D. RL Osborn-He had a very smooth style, and he was the 1st Pro I ever met and got to see perform. The BMX Action Trick Team performed in my home town in 82 or 83ish. The Team included RL, Mike Buff and  Pat Romano.
E. Trevor Meyer-Very well accomplished Flatlander. From riding for 25 years, X games gold, touring for many years with the best teams and riders, not to many tricks/styles that he can’t do, all around good guy who never complains! Also at 38 he still kills it. He recently took 2nd place at the JoMo Pro. Love him or hate him he's in the Hall of Fame in my book to say the least. 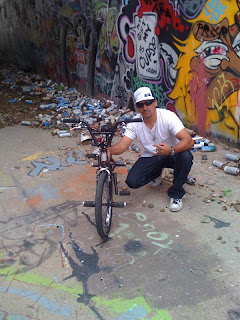 BMX Freestyler- How is your current bike set up? How long have you been rocking it?

Robert Castillo- I've been running a St. Martin Eiffel frame for over a year. I did run a Wells frame for 2 years prior. Both bikes have all the St. Martin goodies. I want go give a big shout out to St. Martin. Old school tricks on a new school bike and it seems to work.

BMX Freestyler- Is there a trick or combination that has been haunting you for years that you just can’t seem to get over the fear or just can’t pull?

Robert Castillo- I never really had any problems learning tricks. I will say this and I'm embarrassed to say but I never learned hang fives. I have done them but I was heavy on the brakes. I gave up on them long ago.. Lame, I know! Maybe I will have to do something about that!!???

BMX Freestyler- Everyone has a great bail story after so many years of riding. What is yours?

Robert Castillo- Cant think of one while riding flatland but, in 1988 while doing shows at Sea World in San Antonio I hung up both tires on a 10ft 1/4pipe and ended up slamming face first. It was ugly and I ended up in the hospital for the night. Sucks!! 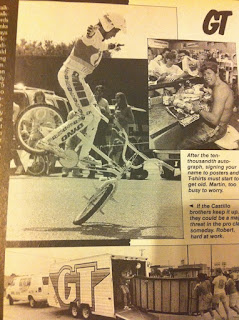 BMX Freestyler- If you could go back into time and have a do over, is there anything you would change?

Robert Castillo- I probably would have watched my $$$$ a little better during the rough times of my BMX career. Other than that I feel like I accomplished a lot of my goals and wherever I came up short I guess it's was just live and learn. BMX has given me a life, good times, friends and memories to last forever. I'm living the dream and I get to ride a kid’s bike for a living. My life is amazing, fun and never boring so no changes nor do overs for me. 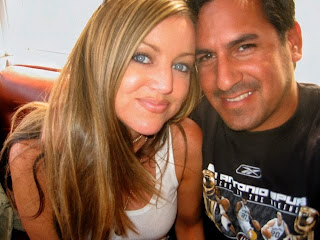 BMX Freestyler- Thank you so much for your time Robert. Do you have any last words or Shout outs?

Robert Castillo - Last words? I know this might sound cheesy or you've heard it all before but, "life is short". You will only have a few true friends and even less that you can count on. For the few lucky people out there try to spend as much time with family whether it is once a year, by phone, email, Facebook, or whatever, Family is all you really have! Also never let anyone stop you from doing what makes you happy. Peace out and ride on..........

PS: Thanks BMX Freestyler and Rad Dad for this opportunity..... 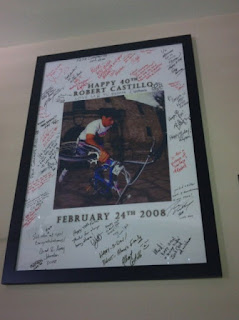