BMX Freestyler- What was your first experience with flatland?

Amahl- I would have to say watching Day Smith and Trevor Meyer compete in the 1996 X-Games on ESPN.
BMX Freestyler- A few months back I saw that you were in BMX Plus, tell me how that came to be?
Amahl- I asked Bobby Carter how feasible would it be to setup a photo shoot with Ben Crockett. Bobby made one phone call, arranged the whole package, and provided the transportation to Burbank. Jeremy Pavia picked the location for the photography and took the picture. 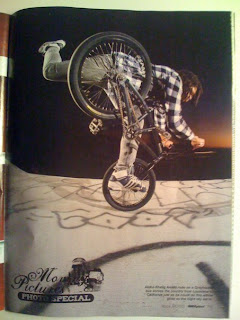 Photo from BMX Plus
BMX Freestyler- When we were riding together this past weekend we were working on various stunts. What combinations are you currently working on now?
Amahl- I was mainly just doing improvisational maneuvers for the most part. I was trying to incorporate opposite Karl Kruiser into combos and re-learn some old links that I’ve lost (it’s too hard for me to explain the links without coming off as being verbose).
BMX Freestyler- We first met each other at the Jingle Jangle Jam in Austin, Texas. Since then we have session in different parts of the country. How do you make it to so many different places for Jams and Contest?

Amahl- I just been very fortunate to hitch rides with other people. I’ve been known to take the Greyhound bus from time to time.

BMX Freestyler – During an online bike check your bike was needing a little work. It’s super tight now. How is your bike set up now?
Amahl- I’ll give you an abridged version of my current bicycle setup: 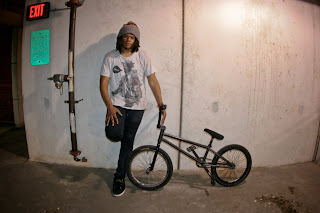 Quamen Cool Frame (21 top tube), Quamen 49er stem, Chase Gouin’s custom Odyssey fork, two Animal MK3 pegs, Éclat Tibia cranks (170), We The People Everlite version II bars (8.25), Animal Stitched pivotal seat, Proper Magnalite front hub, and Federal version 1 free coaster.
There is nothing “flatland-esque” about my current setup.
BMX Freestyler- Everyone has a great bail story what is yours?
Amahl- There is nothing great about bailing, but according to Johnny Tamayo, it looks like I’m diving into a mattress when I do fall on the ground.

BMX Freestyler- If I am correct I rode with you at your first contest. You have progressed to the expert level with some very technical switches. What is your motivation to ride and progress?

Amahl- Honestly, I don’t know. The flatland discipline has taken a weary toll on my body mentally. As of now, I have more fun just pedaling around (insert random metropolitan area) or “nibbling” on a small ledge or curb than riding flatland.

I guess it’s my motivation is to have fun, but as of now, I’m having more fun traveling and meeting new people than the actual riding itself. But I’m sure once I install a front brake onto my bike; the word flatland will be a convivial brain cue for me again.

(One week later) I honestly love flatland, even though I have a strong disliking for it at times. That’s just how relationships go in general. I have a new riding spot, and I’m very happy.

BMX Freestyler- Who are your top 10 flatlanders?


Amahl- I can’t name just name ten riders and be pleased with it, but here is a list of sixteen:

I would have to say Pedro Melo, Day Smith, Michael Steingraber, and Eugene Collins have made the biggest impact on my riding.

BMX Freestyler- You are an accomplished musician as well. Tell me how your music has been a part of flatland?

Amahl- Some of my music has found its way in a couple of flatland related web edits and DVDs (Props Video Magazine and Diversion), so I guess that’s how it can be associated with flatland. I personally try to separate the two disciplines from each other. 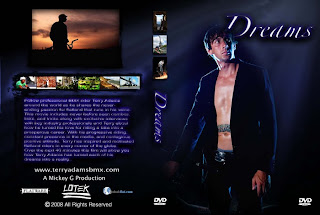 Some of Amahl's  music featured in "Dreams"
Click image to buy your own copy
BMX Freestyler- If you could go on a worldwide tour, what would be the 5 places you would go?

Amahl- Cuba, Mali, Hungary, Malaysia, and Portugal (Trinidad would be a runner-up choice).

I would also like to thank everyone I ever rode with, from underground riders like Randall Wills and Rio Pena to living legends and pioneers like Bill Freeman to R-Dog.