﻿ Recently I was thinking about all the different flatland crews there are out there. I know many of the cities but I really don't know much about the whole scene. I wanted to start a series of scene reports. I thought to my self why not start off with your good friends in Wisconsin. All questions were answered by Tony Schneidewind.

Andy Musil, Brad Dixon, Brandon Gale, Brandon Harshaw, Chad Carpenter, Chad Gale, Clancy Burke, David Podkowinski, Josh Hanson, Mike Kucak, Scott Wangerin, Seth Johnson, Tim Knoll, (me) Tony Schneidewind and a few others that may come out a few times during the year.
﻿﻿Who are some of the riders that have left or dropped out of the scene?
Well the ones during my time so far are. Andrew McComb, Chris Halverson, Chris Hoag, Ryan Silva, but Ryan is getting back into it after a long break. I'm sure there was plenty of others, I just don't know them.
What days and time do you ride together as 1 group?
It depends, we all live in different areas farthest is about 1.5 hrs away, so we only have 3 - 4 jams a year where everyone comes together. The Milwaukee crew rides a couple times a week together, and I'll usually make the hour trek out to ride those guys. 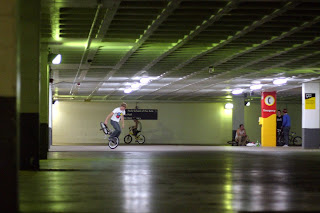 Who is the youngest in the group and how old?
David Podkowinski and is 17 years old.
Who does most of the filming/photography for the crew?﻿﻿
Mainly it's been me, for Video and Photos. David Szymanski takes awesome Pictures as well. David Podkowinski and Mike Kucak make some web edits too.
﻿
﻿
Also I'll be releasing the latest Flat video of our scene in a month or so. I'll be posting it on vimeo.com, plus I'll have some DVD's made that I'll try to see if Pat at Flatlandfuel wants to sell.
Milwaukee BMX Flatland from Pilgrims BMX on Vimeo.
Mostly riding from the halloween jam but some from 84th street. Riders are Chad,Tony,Brandon, and David.
﻿
﻿

Is there a site that people can keep up with your crew?
Not yet but we might try to set up a blog or website, I don't have the experience, but I believe David Podkowinski is planning on starting something.
What is the most common frame in the crew?
Fly/Suelo or St Martin is the most common brands of frames right now. 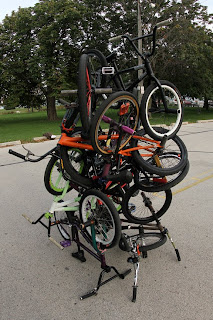 Who as been riding the longest?
Id say Brad Dixon again, I know he's been riding well over 20 years. Just don't know when he started.
Who is just getting started?
The newest would be Brandon Harshaw, been about a half a year now.
(sorry no pics)
How far does everyone travel to get to the rider spots?
Well again the main spot is in Milwaukee, so about 1.5 hrs for the Manitowoc guys, and about an hour for me. I'll try to get the Milwaukee guys out by me in Watertown a couple times a year as well to even out the driving between us.
Who is the parts guy?
Haha! Josh Hanson. I believe both Andy's and Clancy's Bikes are pretty much built up from Josh's used parts.
When is the last time you had session as a crew?
A couple weekends ago we had a session at UWM Milwaukee. We had around 10 guys. It's tuff now that winter is approaching and we don't have any indoor spots other than the UWM garage which is heated. 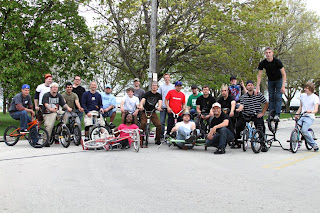 Do you have any pro level riders in your crew?
No but I’d say Seth Johnson is the closest. The guy has a ton of tricks, and is always learning new stuff or is learning old tricks on the opposite side.
The closest Pro living to us is Matt Wilhelm. He lives in Chicago, but he's not really a part of our scene. I don't know why we don't make the trek down by those guys more often (vise versa), cause they have a pretty good scene too, and only live 2 hrs away.
Does your crew play any fun riding games?
Not too often, we'll do a longest trick contest sometimes. 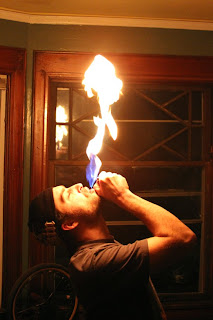 Do you have any closing comments?
Yeah! Thanks to you Rad Dad for setting up this Scene Report Interview, and always keeping all of us Flatlanders Connected, Pat at Flatlandfuel, The Joliet Crew for making the trek up a few times now, the Indy crew for all the fun contests hope to see more, And everyone keeping this scene alive.
Thanks to you all.