After publishing the WI Scene report there was a great deal of positive feed back. One of the suggestions was to make a map with all the places that has had a scene report completed. click here There also were many people to contact BMX Freestyler expressing interest in doing a report in their home town. This is the MN Scene Report. All questions were answered by Dale Kirvelay.

How many active members are in your crew and who are they?
About eight give or take a few. There's myself (Dale Kirvelay), Rich Wieber, Skylar Wieber, Scottie Walker, Jason Tufty, Cj Brynildson, Corey Meyer and Zach Visker. I hope to see the list continue to grow.


Who are some of the riders that have left or dropped out of the scene?
Jason, CJ, Corey and myself are all in our 30's and we are all just getting back into Flatland after long layoffs for various reasons. We've been back at it seriously for one to two years. I don't really know of any other riders who have left. Hopefully if there are any, they'll see this and contact us and come ride.


What name does your crew go by?
At present we don't have a name for our crew. At least one that we use ourselves. I suppose anyone outside of our crew can just refer to us as the MN Crew. I am however hoping to organize a group or club of riders before next winter. Nothing revolutionary, but I do have a name for it that I'd like to use as well as a logo that I'm seeing in my head. I hope to get the city involved and hopefully get a hook up on a winter spot next year. I know it will be an uphill battle but I think it would be a positive thing for kids who want to learn and for those of us who are already dedicated to the sport.


Who has nicknames in your crew?
Actually nobody has a nickname. Although we tend to refer to Jason as just "Tufty".


Where is the meeting spot or spots?
I am fortunate enough to live a quarter mile from a HUGE outdoor skatepark that is run by the city of Roseville, MN called "The Oval". It is open from May until early October every year. I spend at least five days a week there and that is where we meet for the most part. You just can't beat this spot. It's enormous, flat and bike friendly. Plus it has a good selection of ramps for us to use if your into that sort of thing. I brought Trevor Meyer to the Oval the last time he was back home and he thinks it would be a perfect place for a big Flatland Jam so I've had that idea burning in the back of my mind for a little while. 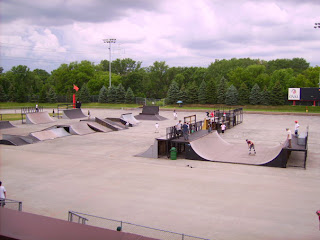 Winters are harsh here and getting in a good session becomes very difficult. Jason Tufty has a pole barn on his property about 40 minutes north of me and that's where we've been riding lately. But given the location and the smaller riding surface it's been hard to get everyone together for a jam. I just get together with whoever can make it out and we deal with the temp and try to have fun, progressive sessions.


What days and time do you ride together as 1 group?
Due to work and such we generally get together sometime after 4pm on weekdays. We see
each other and ride pretty much every weekend in the summer because we're all helping out
Rich Wieber with his stunt show. More on that in a minute. 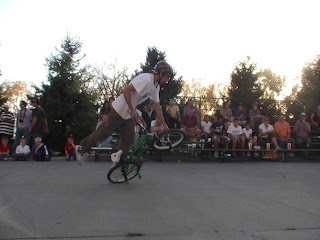 Who is the oldest in the group and how old?
The oldest rider would be Rich Wieber. He's 39. He's been riding nonstop since 1984 or '85. He is a ridiculously dialed rider and a huge inspiration to me.


Who is the youngest in the group and how old?
The youngest rider is Zach Visker. He's 14 and just started riding Flat. I think Zach has a
great attitude and a lot of potential.


Do you have any pro level riders in your crew?
Yes, Rich Wieber. Like I briefly mentioned earlier, Rich runs his own Bicycle Stunt Show.
Rich has been doing shows and competing since the Mid eighties. You name it, he's done
it. Comps, shows, magazines, sponsors, television…etc. Around the late nineties he began
doing his own shows. A mix of flatland and ramps. So we get together and help Rich with
his shows, whether it be setting up ramps, sound or even riding in the shows.
Rich is hands down the most motivated person I've ever met in my life. The guy is firing on all cylinders at all times. He's also the hardest working guy I've ever met. If he's not riding his bike he's booking shows. And during the winter months he travels the country doing school shows for kids. I began riding Flatland due to a chance meeting I had with him. I haven't been the same since!


Who in your crew is sponsored by a company?
The Stunt Show team is sponsored by Spokiz Sunglasses, All-City Grips and SunRamp.
Spokiz Sunglasses are ridiculous. They're a small Austin, TX based company that's growing fast. They incorporate bike nipples in the making of their glasses and have an innovative, low profile wrap-around design that will not fly off when you're riding. Plus, they're lightweight for the weight weenies (like me). All-City hooks us up with the Big Cheese grips and SunRamp hooked us up with a nice box jump.


Who does most of the filming/photography for the crew?
We really haven't done much video yet. A little filming here and there. I'm hoping to get something together this coming summer with everyone. Shoot video all summer and make a good edit in the early fall.


Is there a site that people can keep up with your crew?
Our crew is tiny so we really don't have a site. Answering this question though has made me
realize I can probably do a simple Facebook page for now. But you can check out the Stunt Team page for info on shows. It may not be updated though for a little while as we're not doing any ramp shows until spring. You can find us all on Facebook too.


What is the most common frame in the crew?
The Hoffman Strowler. Rich, Jason and Zach all ride Strowler frames. In fact Zach is riding
my old 2009 Strowler because I just switched to a Zion LowKee. Scottie gets down on a Suelo Simple v2. CJ Brynildson does his thing on an Ares Force. Corey Meyer is riding a
St. Martin Happy Place 2. 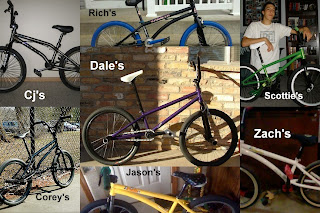 
Who is just getting started?
Zach. He still has that "new flatlander" smell.


How far does everyone travel to get to the rider spots?
In summer I only need to go on a very short ride to get to the spot. I work a few blocks
from where I live so I just bring the bike to work and ride to the spot afterwards. Everyone
else has to drive 30-45 minutes to get there. But in the winter I do the long drives because the
barn is farthest from me.


Who is the parts guy?
Probably me. I have been through a lot of parts recently. I'm definitely the weight weenie of
the group too but for a reason. My back kinda hurts constantly and a lighter bike really works
out in my favor and allows me to ride longer. Jason's a parts guy too though. He knows his stuff.

When is the last time you had session as a crew?
It's been awhile since everyone was together but the last time most of us rode together was in October at a show we did at Elko Speedway in Elko, MN.


Does your crew play any fun riding games?
No, not really. CJ has challenged me to a game of "bike" though.


Who is the main person to contact so other riders can hook up with your crew?
You can get in touch with me at: kirvelay.dale@gmail.com
Look me up on Facebook too if you like. If you happen to be coming through, hit me up and let's ride!


Do you have any closing comments?
I want to thank Mark Dandridge for the opportunity to share what's going on up here in MN.
To me, this scene report idea is great. I can't wait to read what other people are up to in some places you don't normally hear about. You'll be hearing more out of this crew and hit us up
if you want to ride. Peace.