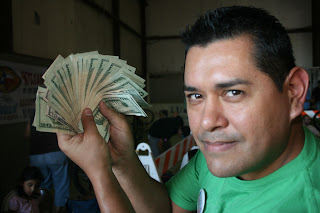 With the Texas Flatland Roundup 8 around the corner (October 13-14) I thought it would be a perfect time to do some hype interviews. I could not think of a better way to start them off than with the creator himself, Chris Balles.
Chris, you have been holding down the Texas Flatland Roundup for 8 years. How did you come up with the idea to hold a contest every year in Texas? Well, when I put the first one together I never imagined 8 years later that we would still be going strong. I remember thinking that I hope people even show up and as you know the first one was very successful. The Roundup was hugely influenced by Elevation (the contest Hector Garcia put on) and Voodoo Jam. It was after the first Voodoo Jam that I had gone to and Hector was no longer doing elevation so I felt the need to throw something down in Texas. I couldn't do it myself so I went to a website called BMXFREESTYLER.COM and emailed the creator of that great website, some dude named Mark Dandridge and we got together and created THE TEXAS FLATLAND ROUNDUP!
This year it’s a little different because the Roundup will be combined with Texas Toast, what was the concept behind this? It was actually a fluke. Taj Mehelich was planning to do his Texas Toast on the same weekend I was planning Roundup 8. He contacted me and asked if I would be interested in doing together as it wouldn't make sense to have two major BMX events going down at the same time 30 miles apart from one another. We figured it would be amazing to have one big full on BMX event. So the Texas toast/Roundup was born!
What was your favorite Texas Flatland Roundup so far and why?Gosh, There are a few that have been very memorable for different reasons. The first one of course because I didn't know what the hell I was doing when I was putting it together and it turned out great. Roundup 2 was awesome because of the vibe and the riders that showed up. Terry Adams, Justin Miller, Matt Wilhelm. I couldn't believe that these big named riders were at the Roundup in San Marcos, TX. I was floored! Roundup 7 when Jesse Puente showed up!! I've been a fan of JP for over 20 years and it was awesome to watch him ride at the Roundup. Roundup 6 when both my kids were there, Ian helped out a bit and my little guy, Michael who was only 6 at the time told me I was the coolest dad ever for putting on the contest every year. Man, it’s hard to choose just one.
I think Texas Flatland Roundup was the first to do an older class now known as “Vet Class” is there any plans to have a “Vet Pro Class”? That is an idea that we have tossed around. I don't know, we will have to come up with a way to separate modern day pro riders who are over 30 (or 40) and old school Pros from the 80's and 90's who truly are Pro material but can't effectively compete against riders like Mathias or Uchi. It certainly will be a challenge but I think it's something that may make a début in Roundup 9 or 10.
The past 4 years have been at the Hays Civic Center with a very large area. What will the floor be like in the new venue? LARGER!! Everything is big in Texas, Right?? The Texas Flatland Roundup 8 will be held in a 10,000 sq. ft. warehouse. Our goal is the have a practice area separate from the contest area. This way if a rider chooses to practice right up until his run, he could do so.
Being attached to the A.M. Flatland Circuit has brought a ton of attention to the Roundup this year. How did this come to be?Steve Lapsley contacted me last year and we actually wanted to have Roundup 7 as part of the circuit but it was too late. Steve thought Texas would be a perfect place for the year end results and of course I will do anything to push flatland and make the Roundup bigger so I was all for it.
Any last shout outs? So many!! First, I like to thank my family. My parents have supported flatland since day one, when I was younger driving me to all the AFA contests back in the day. They still help with the Roundup one way or another whether it's watching my son while the contest is happening or just going to the contest to show their support. There have been times where I had to do something for the contest and it took away time from my kids Ian and Michael. I love my kids so much. HUGE thanks to BMXFREESTYLER.COM and Mark Dandridge for all he does to keep people motivated and to keep flatland alive in the United States. BIG thanks to everyone who has ever come to the round up whether spectator or competitor but a REALLY big thank you to everyone who's been to everyone, Art Thomason, Cesar Calderon, "EZ" Chris Anderson, Kelly Baldwin, Jim McKay, Mark Dandridge. I know I'm leaving some people out so I apologize but big thanks and recognition to you guys as well!! I'd like to thank the LULAC organization for allowing me to have the Round up at their county fair/BBQ cook off for the past four years. I'd also like to thank my ex-wife. Even though we went through some crazy drama and we are no longer married she fully supported Texas Flatland Roundup 1 and 2. If it wasn't for her there probably wouldn't have been a Round Up to begin with so, thank you Stephanie!