Tragedy at the O.G.

2:00 P.M In Austin, Texas May 30, 2009. We held the Last Saturday Jam. It started out with our friends from Corpus showing up about 2 P.M. I got a phone call from Michael as they were looking for the exact location of the Oltorf Garage. I was able to direct him because he was right across the street from the garage. I gave him a text back to make sure he found it okay. To my dismay he texted me back that after there arrival they were kicked out by a Travis County Employee. They were told it would be better if they didn’t ride there bikes at this location. With out creating more drama they packed up and left and drove around the city of Austin and took in a few of the sites.

3:00 P.M. I receive a call from Adam DiClaudio. I told him that our guest were at the O.G. but had gotten kicked out. He chalked it up to maybe being there just a little too early and someone was still working. He was still headed out to the O.G. and would let me know what was up later on.

5:00 P.M. “Where you at?” said Adam as I gave him a call. I am on my way to pick up Hecktor Dangus and I am on my way. I scoop Hecktor up and we make it down for an evening of flat fun!

6:00 P.M. We pulled into the O.G. and it was packed. Many of the O.G. riders were ripping it up and doing what we do every Saturday afternoon, riding flatland. Ruben Castillo, David Weathersby, EZ Chris Anderson, Leo (on Crutches), Jim Mckay, Adam DiClaudio, Chris Mead, Michael and Brandon from Corpus, Chris Balles, Julio Cotto, Mark Dandridge and Hecktor Dangus.

7:00 P.M. Chris Balles tells me that the Texas Flatland Round UP 5 is officially going to happen this year on October 10, 2009. More details to follow so go ahead and mark it down on your calendars. This event will give the Beginner/Intermediate/Expert and Pro riders an opportunity to compete.

8:00 P.M. Things are starting to wind down people have been peeling off and headed home. We got there so late we were trying to get as much riding time as possible. It got down to my self (Mark) and Julio still working on tricks while everyone else has gone in to social mode and just chilling out. 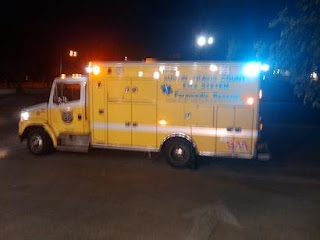 9:00 P.M. The most unimaginable thing happens while Julio was working on his whiplash variation. Just as he was about to complete his very first one his arm comes out of socket and he is screaming in pain. He didn’t fall on the ground. He was holding his arm in pain and I could see that things were not normal. He tells everyone he thinks his shoulder has been dislocated and he needs emergency help. I dial 9-1-1 the ambulance arrives quickly. The EMT was not very friendly and made this situation harder to deal with than it already was. Julio was hoping that the EMT would be able to place his arm back in the socket but he said he was not equipped to do this task and he would have to take a ride on the ambulance or a ride with one of his buddies to get the medical attention that he needs. Julio opted for the EMT to take him because he was in no condition to sit up and ride.

10:00 P.M. The E.R. room is extremely crowded and it takes a while for the front desk to find Julio for me. Hecktor Dangus and I have gone to the E.R. room to help take care of Julio after everything is done. I go to Exam Room 10 and see Julio hooked up to an EKG and IV and still in a lot of pain. They are trying to get x-ray team down and confirm what everyone believes is an out of socket arm. 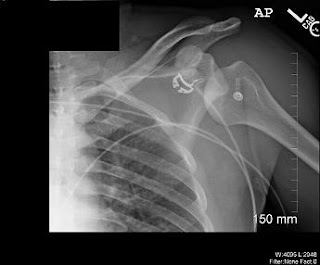 11:00 P.M. The x-ray shows conclusive and they begin getting things ready. Julio was given drugs for the pain and to put him under for about 15 mines. I was watching the whole time and with in 1 min of the drugs being injected he was out. The doctor then pulled his arm and pushed up and in just popped into place. Everyone was pleased with how well it went and said Julio would be waking up in about 10 min or so. They were not lying at all. In fact he was awake a bit faster than 10 min. I told Julio it was over and his arm was back in place. He was still kind of out of it but he was coming around. 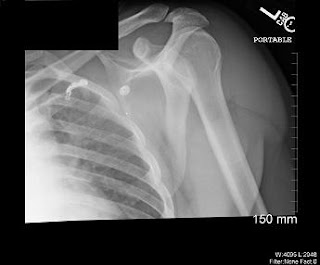 12:00 A.M. We are now getting checked out of the E.R. Room. They have completely skipped the initial part that comes first and started asking detailed information. It was kind of weird but it was nice they didn’t try and do all that while Julio was in pain and could barley think about anything else. Since Julio lives about 2 hours away in San Antonio. Hecktor Dangus offers his home to sleep at through the night so we don’t have to take the drive home after everything else that has happen that night and Julio can get some much needed rest for the night. Julio accepted and we got him settled in for the night.

1:00 A.M. I make it home for the night. I make a text message to a few riders so they don’t worry about Julio. I crash out for the night.

11:00 A.M. I called Hecktor Dangus to see how the night went. Julio was doing just fine. He was planning on driving home latter on. He is happy that the ordeal is almost over. Just a few days in a sling and things can go back to normal. This was the worst accident in my time at the O.G. to ever happen. It taught me a valuable lesson and to have some plans in place if this was to ever happen to my self or my other friends. Yes it was a freak accident but these things can happen. It’s beneficial to insure that you carry your insurance card and contact information for emergency contact with you at all times. Keep safe and Keep on Riding!
Posted by Mark "Rad Dad" Dandridge at 5:56 PM